A few quite subjective recollections
by
Klaus-Eckard Riess 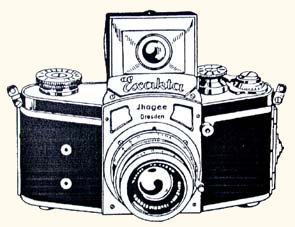 Ihagee Kamerawerk was founded by the Dutchman Johan Steenbergen in 1912. During the following years the company brought many interesting camera-constructions on the marked. 1936 Ihagee created the great sensation with the Kine Exakta, designed by Carl Nüchterlein. This was the world’s first single-lens-reflex camera for the 24x35mm format.

During the Second World War the nazis forced Johan Steenbergen from his buseness, making him emigrate to the USA. The factory was totally destroyed under the big bombardement of Dresden on 13th February 1945. But already in May 45 another start-up took place in a partly burnt out building on Blasewitzer Strasse in Dresden-Johannstadt. Being a privat company with foreign capital, the Ihagee Kamerawerk AG. held a very special position in the Soviet occupied zone of Germany, later from 1949 the communist DDR. In the sixties the company increasingly came under the influence of VEB Pentacon Dresden, finally loosing its independent status totally 1970.

Personally I heard the name Ihagee for the first time 1950. I was at that time 11 years old and lived together with my mother and two brothers and my mothers father in our home on the outskirts of Dresden. My father, who was employed for 20 years by Zeiss Ikon AG., had disappeared in one of the communist Gulag-camps, and only returned in 1956. Thus my mother was the sole provider for us all. 1950 it became necessary for my mother to find another job. Recommanded by an acquaintance, she started at Ihagee Kamerawerk whose sales manager at that time was Max Rockstroh. He had attended the same senior high school as my father did. Both were for life connected with the school’s friendship club. My mother was employed in the company’s department for electroplating, where the camera parts were nickle- and chrome-plated. This was an unpleasant and surely also a poisonous job, though somewhat better paid than office work. From time to time my mother also worked in the so-called “mechanic” where the camera parts were milles and drilled. She always spoke about how the assembling department was the cleanest and most sought-after to work in the company. All the work was piecework thus paid at merit. Periodically the factory was kept going day and night in 3 shifts. I recall my mother was on the night-shift at the time, when the June 17th 1953 revolt started and the state of emergency was declared. Nobody was allowed out between 10 p.m.. and 6 a.m., and how locked up my mother felt then. At the time when my mother began to work at the Ihagee KameraWerk, the factory-building still was partly destroyed and became restored little by little. I still see myself standing waiting for my mother at the factory gate. The building next door was also restored by the Ihagee. There, together with my brothers, I parttook in a Christmas party arranged for the children of the employees. Each child received a present from Ihagee for which the parents had been given the correct sum in order to buy the special present wished for or wanted. Driving by streetcar from the suburb Tolkewitz towards town-centre, then one passed on Schandauer Strasse just of all Zeiss Ikon’s earlier Ica-Werk, and shortly after Ernemann-Werk with the famous tower (Pentacon-logo). Everywhere burnt out houses were apparent, but from Polandplatz the impression was a desert of ruins. Here on the corner of Schandauer Strasse and Bergmannstrasse the original Ihagee Kamerawerk was situated. I still tell myself that I on a tall wall standing amongst the ruins saw the name Ihagee and a big picture of a Kine Exakta.

1952 Ihagee Kamerawerk celebrated its 40 anniversary. For that occasion two gilded Exakta Varex cameras were produced, which the managers Max Rockstroh and Willy Teubner were presented with the anniversary party.

Later I was told by Herbert Blumtritt – the author of “Geschichte der Dresdner Fotoindustrie” – that in fact 6 or 8 gilded Exakta cameras were produced. The Russian cosmonaut Juri Gagarin was given one, likewise the Shah of Persia and Emperor Haile Selassi of Ethiopia. The photo shows Max Rockstroh’s camera, owned by his daughter today, I think. 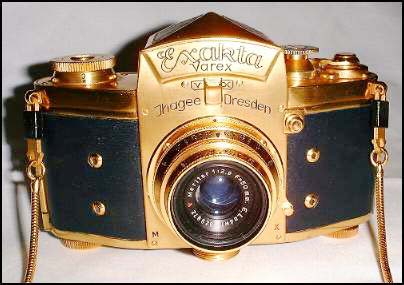 I’m smiling when I remember my mother, who always appreciated good manners, because she thought that in contrast to the very cultivated and language gifted Max Rockstroh the technical manager Willy Teubner was short of good upbringing, as he would speak to people with his hands in his pockets. Towards the end of 1953 Max Rockstroh left the company and moved to Western Berlin. The following year the problem with the new Exakta 6×6 was the subject of the talk in the company. As one of the main responsible Willy Teubner took the consequences and resigned. From what I learned after, he ended up with the Regula Kamerawerk King in Bad Liebenzell.

Walter Kretzschmar was employed as the new manager for Ihagee Kamerawerk. The employees were proud of the special position their company had, thanks to the Dutch capital, as in East Germany most of the companies were conficated gradually by the state. It was the general concept that Walter Kretzschmar, himself a member of the communist party, was to influence Ihagee’s staff in that direction. However, the opposite seemed to be the case. The spirit of the Ihagee infacted the new manager.

The spring 1955 my mother and younger brother came to owe a great thank to Walter Kretzschmar. The reason was being that the communist school authorities were not going to allow my extremely bright brother to start at the senior high school, as our family was not regarded as belonging to the working class. My mother therefore contacted Mr.Kretzschmar who saw the unfair in the situation. As the manager of the world reknown Ihagee Kamerawerk he used his influence with the hard-line communist school authorities, which at least allowed my brother to enter the school.

Later that year my mother left the Ihagee Kamerawerk due to serious illness. But she kept the contact with the Rockstroh family in Berlin as well with the cultivated Miss Pötsch, who was in charge of the wages office at Ihagee.

In the meantime I myself started my training at VEB Zeiss Ikon in Dresden-Reick. Almost as nature’s law photography and phototechnic had to be my hobbies. The row of all the admired cameras was led by Exakta Varex, the world’s first first and leading 35mm SLR-camera. To buy an Exakta was not easy though. Most of them were exported, so generally the buyers led do with the little sister Exa.

During the following two decades the Exakta camera’s star started to loose its aura. On the other hand the world was conquered by a camera concept, which Ihagee’s Kine Exakta had show the way with in 1936. Nikon F arrived on the marked in 1959, starting its triumphant victory, followed by other SLR-cameras. The German camera industry slowly had to bow out, to see itself superceeded by the Japanese. But this is quite another story.